Q & A with Ahilan Ratnamohan 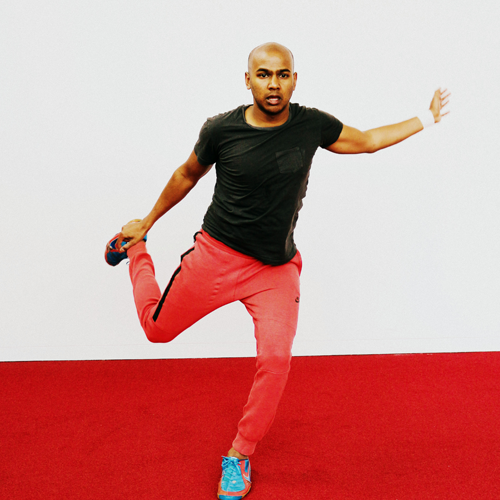 We had the chance to chat with Ahilan Ratnamohan ahead of his season of Drill at PICA. Find out what he has to say about his creative process, what he does to prepare himself for such exhausting performances and his team:

Tell us about Drill. How did the show develop since your residency with PICA in 2013? What’s your process like when creating work?

The show has developed considerably since the first development at PICA. I really loved what we came up with in that residency but at the same time there was something about it which remained very choreographic and perhaps didn’t reach out and invite an audience to feel and identify with the performers. The show ended up getting somewhat transplanted to Europe (due to my family situation). So some really concrete changes were working with a Belgian dramaturg, Kristof Persyn, and performer, Arno Wauters instead of my Australian collaborators in Perth, Josephine Wilson and Connor van Vuuren. We also went from the hot Perth summer to the cold Belgian and Dutch winters, if that has an effect would be a bit hard to determine, but I think Manny (our Perth-based performer) and I definitely missed Perth when we were getting slammed by the flu.

My process is usually a devising performance, which basically means that I give the performers a series of tasks and improvisations to respond to, we then take their responses and try to shape and develop them further, finally we try to fit them into some coherent structure, which can often be the hardest bit. With Drill I worked with this and a having the group learn choreographies (which I had made in the studio alone). For example I already had a vision of how I wanted the piece to end, more specifically what movement aesthetic I wanted. As we got closer to the premiere our dramaturg through a bomb in the whole process, because he felt it really wasn’t working, and we decided to simplify and go back to the roots of sports training. So for the last week we would just plan these regimented training sessions which would sometimes be going over the 2-hour mark. Through this we were able to find what we thought was the right atmosphere for the work.

It kind of happened rather than being decided. Growing up I had always been interested in acting and I studied film before and whilst pursuing the football dream. But it was when I first came across companies like Urban Theatre Projects and Branch Nebula that I started to get quite taken by contemporary performance. When I went to Europe to pursue football I still had this dream of being the pro-footballer who lived in a small apartment, rode his bike to training and was writing or making performance on the side.

It all turned when I went back to Australia during the European off-season with tickets booked to return to a club in Germany, a show I had performed in was re-mounted, UTP asked me do a cameo in their Sydney Festival show The Last Highway and from there on in new reasons to stay in the performance world just kept popping up.

You’ve been involved in PICA’s Spark_Lab Program working with kids from Warnbro Community High School, what’s been the best thing about this experience?

Seeing that such a school exists. It’s really an inspiration just to walk around that place, it’s like they’ve hijacked a school to make an arts centre (in a good way).

What made you want to work with Imanuel Dado and Arno Wauters? Tell us a bit about them, how did you meet?

I met Manny (Imanuel Dado) the first day I arrived in Perth for my residency at PICA. We met up at a park and did an audition for Drill. I think I knew pretty quickly that he was perfect for the job. The tricky thing with Drill, and my choreographic work in general, is that I actually don’t want to work with dancers, or at least I don’t want people to dance, I want them to ‘sport’. Yet having people who understand movement and can respond to tasks makes creating a show much easier. Manny works professionally as a contemporary dancer but he comes from this real diverse movement background as a bboy, martial artist, sprinter and rugby union player.

I asked Arno to join us for the same reasons. He’s an acrobat/circus artist who runs a circus school in Antwerp, but he grew up playing basketball. He’s actually my partner’s ex, so we’d been around each other a bit in Antwerp, he’d come and seen my other work and been really supportive.

Drill is an extremely demanding and physical work, what do you do to prepare for performances?

If anything, the creation periods were the most gruelling. Because you are still trying to learn things there is a lot of actual drilling and it the lactic acid and general soreness just begins to build up. We had a few ways of dealing with this; in general we worked shorter days, and also planned a number of specific stretch moments during the day, we sometimes split our weekend so that we’d get a rest-day more frequently. And then there were the ice baths

I’m a massive believer in ice baths. At this residency in Tilburg they happened to have a pool in the backyard and it was pretty hilarious to hear the screams coming from it in the middle of the European winter.

Now that the show’s been made, it’s much easier. One needs to maintain fitness, but the preparation is actually more in the recovery, a good stretch, an ice bath, wearing skins to bed, another stretch at some point… By the fourth or fifth show in a week you usually feel it.

What’s next for you?

A lot of different things on the cards, but concrete: I’m busy on a new show with the Star Boy Collective, that’s a group of West-African footballers in Belgium, with whom I made a football-dance-theatre show, Michael Essien I want to play as you…, 3-4 years ago, we’ve continued to make non-football-related work since then, this will be our third piece and it’s a really crazy evolution. Next to that it’s mainly touring existing work and waiting for the right context to start on some other ideas.

Drill is on at PICA from 24 – 27 February at the PICA Performance Space. Find out more and purchase tickets here