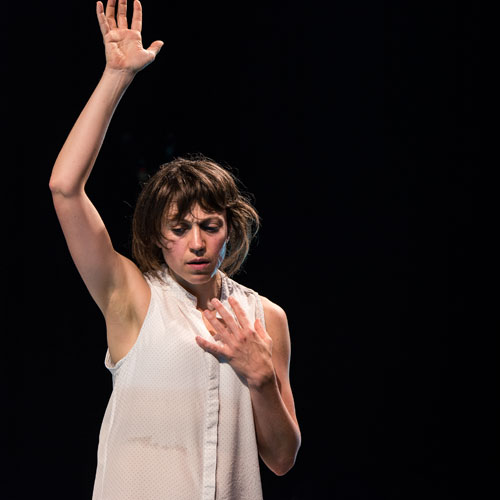 We had the chance to have a chat with Piece for Person and Ghetto Blaster performer and creator Nicola Gunn ahead of her performance season at PICA as part of FRINGE WORLD 2016. See what she has to say about unnecessary acts of violence, new directions in performance making and how touring impacts on her show:

What motivated you to create Piece For Person And Ghetto Blaster?

I was interested in this thing that happened to me, where I intervened in what I saw as an unnecessary act of violence. I was particularly interested in how I reacted in the situation, how my actions escalated the violence, and the fact that I found the confrontation – in a way – pleasurable.

This show is a continuation of your work in exploring the relationship between being and doing; what is your personal interest in this area?

If I say, I am a good person, do I do good things? Not always, no. So I’m fascinated by the complexities of human behaviour. And often, how our identity is so wrapped up in what we do. If I say I am an artist, I define myself as a person who makes art. And what if I no longer made art, who would I be then? When I don’t have a purpose or when I don’t feel useful, I often get very depressed. So I only feel like myself, when I’m doing things that shape my identity and this is I suppose where the talking and dancing practice comes from that choreographer Jo Lloyd and I have been developing and that you will see in this work.

You’re in constant motion throughout the show, with the movement sometimes reflecting the text, while at other times seeming in direct conflict. The interplay of text and movement is a really striking feature. Where did the idea to fuse these often isolated elements come from? Was it a challenge for you and Jo to integrate choreography and dialogue?

In this work I had a strong desire to exhaust myself physically whilst performing ‘unnecessary acts’ that could be seen as a ludicrous or violent intervention into what could otherwise have been a normal piece of text. It comes from a practice we started developing in 2014 when we did a 10-hour durational performance at the National Gallery of Victoria for the Melbourne NOW exhibition. It started at as a empathetic feedback loop with a participant from the public, called “conversation therapy” and now it seems to have morphed into what can only be described as “ethical aerobics”!

Yes it was a challenge to combine the two because it’s important they exist on different planes, meaning that they need to have their own dramaturgical narratives, tempos, energy, rhythms.

The show features really minimal but very striking design elements. Can you describe how the design supports the show?

The space is shaped like a ghetto blaster, in that it is panoramic. I’m purposefully using black and white, and a grey floor that encompasses most of the playing space. The grey is important; it suggests uncertainty and the uncomfortable nature of not having clear cut solutions to complex dilemmas. The ghetto blaster I use is the largest ghetto blaster ever made: it’s been called the ‘holy grail’ of ghetto blasters. It’s a 1985 Sharp GF-777. The projection in the second half of the show is an abstracted image of the canal where the story takes place, so you have the water and the bank and these are clearly delineated with block colours. In the work, I talk a lot about ‘crossing the line’ so the visual design is very suggestive of this. The final sequence is a surprise.

This will be your third production in Perth after Hello my name is and a short excerpt of In Spite of Myself, both at The Blue Room Theatre. Are there any similarities with those works, or is this a new direction for you?

It’s a continuation of both these works. Both Hello my name is and In Spite of Myself explore the very function of art, the ethics involved and the role of the artist. A common thread in all my work since I began making performance in 2001 is the idea of transformation and how we are with each other.

For you, what is the overall message you’re trying to send with this performance?

I don’t know about overall message, but I’m suggesting an empathetic understanding of why we do the things we do. And within that, I’m also calling into question the ethics of art as another form of intervention.

This show is part of a national tour, premiering in Sydney before heading to Melbourne and Adelaide in 2015, and finishing up after Perth in Brisbane. Has performing a premiere show in multiple locations had an impact on the final show? Has the reaction differed between cities and venues?

The opportunity to tour and perform multiple seasons gives a work the chance to breathe. As artists in Australia, this rarely ever gets to happen. Usually a work lives and dies in its premier season. I constantly tinker with text and there’s a few things I want to look at before premiering in Perth and I really do believe in continuing to develop the work through performance. There is a point where I will have to say “it’s finished” though, and put my energies into the next piece – which usually starts with the last piece. I ask myself, what didn’t I realise in this one that I want to examine further? Where didn’t I get to this time round? And I start from there.

On a logistical note, it’s useful performing in different kinds of venues and adapting the show to fit. This is crucial if you want to tour internationally – shows need to be economical and “tourable”. Making the show work in a small room like in Brisbane or a grand hall like in Melbourne poses interesting artistic challenges, that’s for sure. But we’re the only ones who notice the difference, and so far the audience response has been very generous. You can never make a work for everyone, nor would I want to. But I’m excited that it’s inciting foyer conversation beyond the passive “I like it / didn’t like it” response. Art should be an active experience.

Piece for Person and Ghetto Blaster is on at PICA from 13 – 19 February at PICA as part of FRINGE WORLD 2016. Tickets and more info here