In conversation with | Astro Morphs

The day before PICA closed its doors due to COVID-19 restrictions, Erin Coates came just in time to meet Astro Morphs’ and interview them in Studio Two.

Erin: It’s great to see you guys again, although under slightly strange conditions.

Erin: I mean, the biological is really creeping into things (laughter). It’s already in your art but now it’s everywhere, isn’t it?

James: We didn’t want it to be too relevant…

Erin: So I last spoke to you guys in September, when we talked about the work you showed in “Other Suns” at Fremantle Arts Centre. It’s great to see how industrious and productive you’ve been since then.

James: So we essentially wanted to pick up where our characters left off.

Erin: So that’s Yow and Sox?

James: I don’t know if we mentioned in the talk but we were calling them the Polymorphic Neonates.

Erin: And a Neonate is a new organism. I know you make a lot of props and costumes for your video shoots. In what order do you do things?

James: So we started without a clear plan and then Bianca came up with this idea and it was probably from Star Wars, like the Cantina band in one of the first ones, and we thought ok, this time, because we play music we thought of making an imaginary band so that’s where a lot of these costumes began.

James: So we started with that one there.

Erin: So, this is a poncho that looks like a scaled up micro-organism.

Bianca: Yes, it’s actually an interpretation of the rods and cones in your eye.
After Jamie and I had spoken a lot about where Yow and Sox were going to go next, when you met them they were in the process of being remade and looking for a mutualism with the environment around them and hence all the, homages to eyes and rib cages.

Erin: So in a way it’s like a world-building cosmology, but on this tiny, tiny biological level. These things are the building blocks of a new lifeform, and we are seeing them hugely scaled up. And glammed up as well. There are lots of sequins. And a sense of flamboyance, of glam rock almost, and a bit of drag.

James: After the last the video, ‘ascension’, we discussed that we wanted to use different materials this time, to continue on with the sequinning but move more into papier-mâché.

Erin: So we’ve got here papier-mâché, sequins, fake fur, lots of tassels, beading, and a kind of fluro paint.

Bianca: Each person who would then come into our film would have a costume and the costume would have almost a personality and a function. I was hoping that when they possess it that they themselves would find something inside of themselves that they hadn’t before and that’s how we would get the personality of the band, I wanted the band to be fun. It’s a celebration of life because it’s about the making of life. 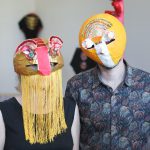 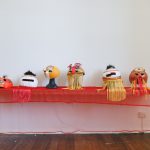 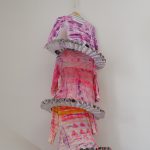 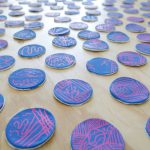 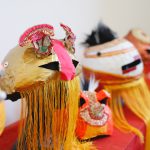 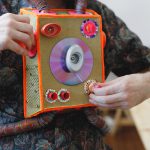