In the lead up to our Open Studio Night on Tuesday 18th October our resident artists caught up to find out a little more about each other and talk artistic practice and influences. 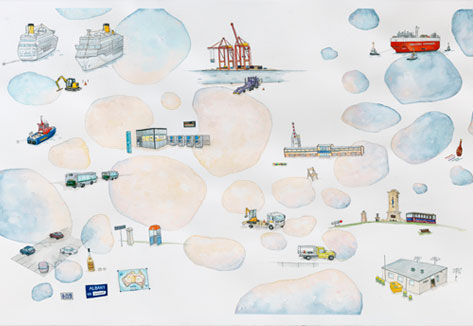 WC | Is there an experience or encounter that played a part in formulating your artistic practice?

APC | My family always took me and my cousin to the Claremont showgrounds Model Train Show, and my dad and gramps both worked at the Midland Workshops building trains before it closed in 1994. This closure and all the images, artifacts, interviews, and union stories my dad collected and the impact it had on the all the skilled workers and families dependent on it for income is still a big presence. I love the space between the ‘real’ technicians/operators of the real life things, and the hobbyists building elaborate homages to them in the comfort of home. My art practice is a bridge between the applied and the imaginary.

WC | Your practice seems to focus on the built environment what makes this space significant for you as an artist?

APC | I want to feel a connection with the objects that make up a space (like the people that make up a place), so I guess I make portraits of them, or diagrams/maps of the interacting elements in a build environment, like a ‘neighborhood’ of things.

WC | What expectations did you have of this residency at PICA as far as developing your artistic practice is concerned and to what extent have these been met?

APC | I love this building and its quirks. It was built as a school, its been a technical college, and is now a gallery through which ideas pass. It is a physical structure that requires care and has a major influence on the experience/movement of the people that enter it or work in it. I’d hoped to explore my sensitivity to these details, and so far I’ve had a lot of new ideas!

WC | Which artists have influenced your interests or practice? 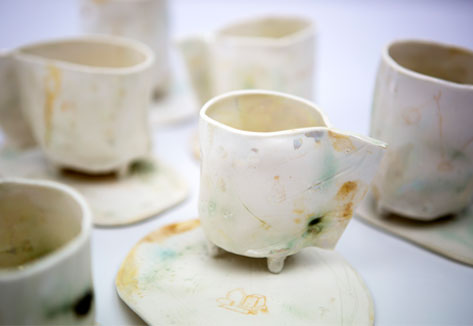 WC | How has your international travel influenced your practice?

APC | I like looking at the places people got to get their essential supplies (marketplaces, supermarkets, grocers, online, roadhouses etc) as I think they’re great living museums. Travel has been amazing to show me the diversity of things people need or use, and how they’ve solved universal problems with different innovations.

WC | If you had to identify a target audience, who would that be?

APC | Anyone that may also have the potential to nerd-out over the poetry in a public transport system.

How do you define and/or navigate the line between craft, construction and fine art

APC | I think, for me, it’s essential to see craft, construction, and fine art as the 3 corners of a triangle. Each is critical to each other at some stage in the life of a thing (even immaterial or conceptual things). It comes down to something being ‘well made’ or ‘fit for purpose’, which even fine art must be, whatever form that happens to take.

WC | Your work navigates functionality within a domestic context as well as the imagery sourced from the shipping and construction industries, how does feminism play into your practice?

APC | I see a lot of shit design targeted at women. There’s a well documented approach some companies adopt called ‘shrink-it and pink-it’ to make an existing useful product they deem ‘masculine’ to appeal to the female market. I see this as an extension of femininity as performance, even some of our products are a performance of functionality. Also, our female bodies in a lot of spheres (particularly the shipping and construction industries) are often seen as less useful, we are only there ‘for show’ (political correctness gone mad!) or are the ‘auxiliary’ team. My feminism and practice is about recoding feminine signifiers (without absorbing the dominant masculine language of industry) as ‘real’ rather than performance, that the things I do and need as a person in this particular body are not just hobbies.

WC | If you could take up an artistic residency anywhere in the world where would it be and why?

APC | Shadowing a maritime pilot in a busy harbour like Hong Kong, Shanghai, Rotterdam or LA (or even a quiet one like Cocos Island). The pilot is the person who goes out from the port on a small boat, climbs up the side of the ships and manoeuvres them through the dangerous or congested waters or a harbour. They need perfect knowledge of the sea floor, the local conditions, and how to operate all kinds of ships from all around the world. Often the only shared language between the pilot and the Captain is the ship itself. This is a very very interesting job, following them would make for some incredible material.

WC | What is the biggest challenge for you as an artist?

APC | My biggest challenge as an artist is the automatic skepticism of a lot of Australians about art. Some people seem to add a moral dimension to narrowing their world view. Traveling a lot has shown me not all societies put their artists on the defensive, or at least the voice of critique or appreciation is louder than the voice of disdain.

Join the artists for our Open Studio Night to hear more about their practices!
Facebook event