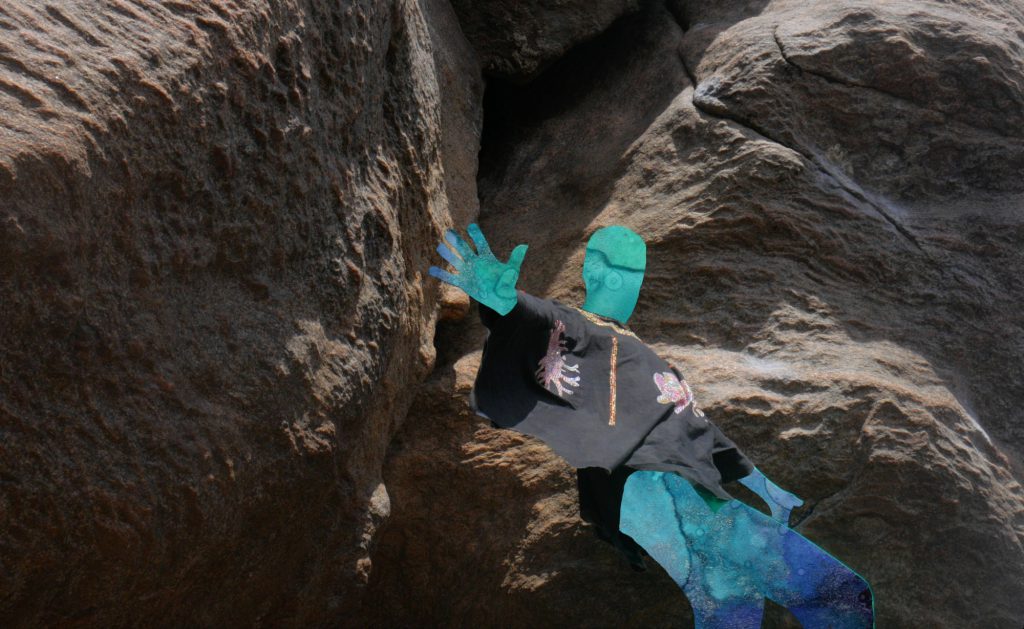 Astro Morphs is a collaboration between Perth based artists Bianca Sharkey and James Doohan. Since 2016 the duo has operated under the pseudonyms Sox and Yow, working across performance, music, animation and video, they imagine the divergent evolutionary pathways of a pair of polymorphic life forms played out in a fictional extra-terrestrial molecular ecology.
Drawing on backgrounds in visual art, science, dance and costume making, Astro Morphs’ practice is an exploration of biological phenomena celebrated through physical movement, musical scores and performance. Through these forms, they seek to question cultural norms that reinforce obsolete practices and destructive behaviours.
“We believe our species ability to survive environmental change lies in our commitment to change the way we think, our values and behaviours.”

Their works to date follow the evolution of two polymorphic life forms through unchartered landscapes set against a backdrop of psychedelic colour and sound fields and macro terrains of other worlds. During a three-month residency in Studio One, Astro Morphs will develop a collection of scenes that document the flamboyant polymorphic neonates as they interreact and establish life on their new planet.

ABOUT THIS ARTIST
Astro Morphs are an audio-visual collaboration initiated in 2016 by Perth duo James Doohan and Bianca Sharkey, operating under the pseudonyms Yow and Sox.
James Doohan graduated from Edith Cowan University (ECU) with a Honours Degree in Visual Arts in 2006. He has since participated in several group exhibitions including the Hatched National Graduate Exhibition at Perth Institute of Contemporary Art (2007) and Coming Unstuck at Free Range Gallery (2015). In collaboration with Perth music label Badminton Bandit, Doohan released the book Mystery Meats in 2010 presenting a collection of his drawings and poster designs.
Bianca Sharkey is currently studying a Bachelor of Biomedical Science at ECU after graduating with a Bachelor of Communications (Major in Scriptwriting and Minor in Creative Writing) also at ECU in 2011. Sharkey has also previously trained in classical ballet (Vaganova method) and performed as a songwriter.
Astro Morphs was nominated for Best Musical at its debut at Fringe World Festival Perth, in 2017. In January 2018 part two Astro Morphs: Crash land was performed at the Blue Room Theatre. The third instalment, Astro Morphs: Ascension, was part of an installation at Cool Change Contemporary Gallery, Perth, WA, 2018; Art not Apart festival, at the National Film and Archive, ACT, 2019; Other Suns: Sci-Fi Cult Cinema & Art, Fremantle Art Centre, WA, 2019; and Chin Chin Wall of Art, Melbourne, 2019. In late 2019 Astro Morphs performed at Pig Melon Art Gallery in support of Manta Ray Martin. Astro Morphs: Ctrl+H is currently in development and will be displayed in an exhibition at Heathcote Cultural Precinct in May 2020.
Astro Morphs continues to release zines via the Sticky Institute (Melbourne) and a webcomic on Instagram.