Piece for Person and Ghetto Blaster

Piece For Person and Ghetto Blaster is the story of a man, a woman and a duck. It is about the excruciating realms of human behavior. It is an attempt to navigate the complexities of trying to become a better person.

An incident lasting all of ten minutes is told from three different points of view: a woman is out running and sees a man throwing stones at a sitting duck. What happens next leaves the woman getting to grips with the event and its consequences.

Concerned with how social conventions obstruct the possibility of personal liberation, the work’s truth lies somewhere in the irresolvable tension created by the gap between live mediation, mediated non-fiction and melodrama.

So what if in the auditorium, all together, we create conflict? And what if we create conflict just so we can practice transformation? Commissioned by Mobile States, this new show from riveting, subversive creator/performer Nicola Gunn, choreographer Jo Lloyd and composer Kelly Ryall, tries to understand how we can all get along.

Watch the trailer below: 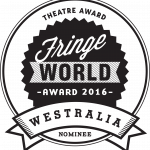 Nicola Gunn is a performer, dramaturg, writer and director. Since 2002, she has been making solo work that blends performance, art and anthropology to explore the fragility of the human condition with subversive humour. Most recent works include: A SOCIAL SERVICE (Malthouse Theatre, 2015), GREEN SCREEN (MTC Neon, 2014), PERSON OF INTEREST (FOLA 2014), IN SPITE OF MYSELF (Melbourne Festival, 2013), HELLO MY NAME IS (Dublin Theatre Festival, Festival De Keuze 2014; Brisbane Festival 2012) and AT THE SANS HOTEL (Theatre Works 2010, Ed). As a collaborator and / or dramaturg, she has most recently worked with Jo Lloyd (CONFUSION FOR THREE and the Stephen Bram installation series, NGV and Gertrude Gallery); Tamara Saulwick (PUBLIC, BigWest Festival); Luke George (EROTIC DANCE); and Ian Pidd, Jessica Wilson and Bec Reid (PASSENGER). In 2016 Nicola will develop a new work with Jo Lloyd, present a site-specific piece as part of Field Theory’s Site is Set programme and she has been commissioned by MTC’s Neon Next to develop a new full-length work. Nicola is lead artist in Sans Hotel with Gwen Holmberg-Gilchrist.

JO LLOYD is a dance artist based in Melbourne. Since graduating from the Victorian College of the Arts, she has presented her work in Japan, Hong Kong, Melbourne International Arts Festival and Dance Massive (FUTURE PERFECT 2013 – Best Dance Award in The Age and Dance Australia). She has performed extensively in the works of Shelley Lasica, Chunky Move (Gideon Obarzanek), Sandra Parker, Prue Lang, Ros Warby and Shian Law. Last year Jo was commissioned to make a ten hour performance for Melbourne NOW at the National Gallery of Victoria International, involving visual artist Stephen Bram. She has worked with Nicola Gunn (Melbourne Festival 2013), Ranters Theatre, Back to Back Theatre, and visual artists David Rosetzky, Alicia Frankovich (ACCA, Melbourne Festival 2014). This year Jo performed in Shelley Lasica’s Solos for Other People (Dance Massive) and created a solo with Deanne Butterworth for Lasica as part of the exhibition, HOW CHOREOGRAPHY WORKS at West Space. Jo recently premiered her new work CONFUSION FOR THREE at Arts House, receiving exceptional reviews. She is currently working with Ranters Theatre on their production COME AWAY WITH ME TO THE END OF THE WORLD, to premiere at the Malthouse Theatre 2016. Jo received two Asialink Performing Arts Residencies and the Dancehouse Residency 2009, and in 2010 she curated 24 HOURS at Dancehouse, which was featured on the ABC. Jo is also the co-presenter of DANCING ON THE RADIO on Triple R.

Kelly Ryall is a composer, musician and sound artist for theatre, opera, dance and film.

Kelly’s chamber opera THE BACCHAE was the smash hit of the 2015 Melbourne Festival. His other recent work includes composition for:  AS YOU LIKE IT (Bell Shakespeare), BOYS WILL BE BOYS (Sydney Theatre Company), KILL THE MESSENGER, CINDERELLA, NORA AND HEDDA GABLER (Belvoir); THE HOUSE ON THE LAKE, EMERALD CITY (Griffin Theatre Co); THE SHADOW KING (Malthouse); and David Williamson’s RUPERT (Melbourne Theatre Company) which toured to USA in 2014 as part of the World Stages International Theatre Festival at the Kennedy Centre in Washington DC.Other productions for MTC INCLUDE TARTUFFE, THE CRUCIBLE, ON THE PRODUCTION OF MONSTERS, RETURN TO EARTH, DEAD MAN’S CELL PHONE, GOD OF CARNAGE and SAVAGE RIVER. For Bell Shakespeare, Kelly composed for AS YOU LIKE IT, TARTUFFE, PHEDRE, HENRY 4, MACBETH, JULIUS CAESAR and THE SCHOOL FOR WIVES. For Griffin: THE FLOATING WORLD, THE BOYS, AND NO MORE SHALL WE PART, DREAMS IN WHITE, MERCURY FUR and DON’T SAY THE WORDS. For Malthouse: DANCE OF DEATH, ON THE MISCONCEPTION OF OEDIPUS, THE TRIAL (with STC and Thin Ice). His work was also heard in the Thin Ice production of DIE WINTERRIESSE, presented by Malthouse/Brisbane Festival and based on the music of Schubert. Kelly’s compositions for dance include FLESH AND BONE and SUNDOWNER for Kage (Carlee Mellow’s EXPECTATION) and PIECES FOR SMALL SPACES for Lucy Guerin Inc. For film, he composed for MEAT (director, Sunday Emerson Gullifer), LOIS and ONE NIGHT (director, Alex Schepisi), and numerous TVCs. Kelly composed and designed sound for Angus Cerini’s performances SAVE FOR CRYING, WRETCH, CHAPTERS FROM THE PANDEMIC, DETEST, SAVING HENRY V5 and PUPPY LOVE. Awards include: Green Room awards for LOVE MONKEY and COOP, 2009; Melbourne International Arts Festival Award 2007; Green Room Award and Fringe Festival Award for ARABIAN NIGHT, 2005. Upcoming work includes: ROMEO AND JULIET (Bell Shakespeare); EDWARD II (Malthouse); DOUBLE INDEMNITY (Melbourne Theatre Company).

His work on THE WILD DUCK for Belvoir in 2011 toured to the Vienna Festival, Holland Festival and The Barbican in London. He lit MTC¹s production of RUPERT which toured to Theatre Royal Sydney and The Kennedy Center in Washington D.C. Niklas was lighting designer on Belvoir¹s ANGELS IN AMERICA which won the Helpmann Award for Best Play in 2013. Awards for include two Victoria Green Room Awards for best lighting design, an Age Critics Award and an ACT Green Room Award for outstanding production of Brink’s WHEN THE RAIN STOPS FALLING. In 2009 and 2010 he was nominated for a Sydney Theatre Award, and in 2008 he was nominated for a Helpmann Award, for best lighting design. Niklas was principal lighting designer at the independent production and design firm, Trafficlight, for 10 years before returning to freelance design this year.

Martyn Coutts is a performance maker, dramaturg and arts leader whose work focuses on the relationship between the live and the mediated body. His work has been shown extensively throughout Australia and across the Asia–Pacific region in Taiwan, China, Korea and New Zealand. His Green-Room- Award-nominated work, I THINK I CAN (with Sam Routledge) has been presented ten times around Australia since its premiere in 2013 and has toured to the USA, Canada and Netherlands in 2015.  Between 2009 and 2013 Martyn Coutts founded and ran the live art resource website, LALA. He was Co-Director of SAC35, a mini-festival in Hobart in 2012, and Co-Director of The Wheeler Centre project, 20 Questions, presented in both Brisbane and Melbourne in 2014. From 2011 to 2015 he has been an Associate Artist at Aphids, programming and creating works including the national tour of THRASHING WITHOUT LOOKING.  He has been dramaturge for critically acclaimed dance and performance works created by Stompin, Luke George, Brooke Stamp, Martin Del Amo, Tamara Saulwick, Paula Lay, Madeleine Flynn and Tim Humphrey, Liesel Zink, Thomas Quirk, Jamie Lewis, Tanya Voges and Kellie O’Dempsey. He is a founding member of art collective, Field Theory, and is currently Deputy Chair of the Next Wave Festival Board of Directors.

Self-confessed crafter, Shio is interested in all things handmade and works in diverse platforms such as theatre, dance, jewelry design and textiles. With in depth understanding of dance and movement, she is interested in designing garments that are visually cohesive and create meanings with each work. Her designs often combine her love of craft techniques such as knitting, crochet and patchwork. Shio has designed costumes for award winning companies Back to Back Theatre (SUPER DISCOUNT, GANESH VS THE THIRD REICH, FOOD COURT, SMALL METAL OBJECT, SOFT), Lucy Guerin Inc. (WEATHER, MICROCLIMATE), Chunky Move (247 DAYS), as well as for artists including Stephanie Lake (AORTA), Jo Lloyd (PUBLIC UNPUBLIC, HIGH MAINTENANCE, HOSPITALS AND AIRPORTS),  Antony Hamilton (FORCES X ANTONY HAMILTON), David Rosetzky (GAPS, UNTOUCHABLE, HOTHOUSE, CUSTOM MADE, SUMMER BLEND), Lee Serle (ACTIVATE, P.O.V., FRAMED MOMENTS), Rhian Hinkley (BOZ’N’HOK VS THEATRE OF SPEED, PORN STAR, FACE OF THE WEST), Encyclopaedia of Animals (URCHIN), Ash Keating (CONTINUUM) and 2nd Toe Dance Collective (THE LOST DANCE PROJECT). Shio graduated from Victorian Collage of the Arts with BA in Dance and studied Fashion at Box Hill Institute of TAFE. She has also graduated from Northern Melbourne Institute of TAFE with Advanced Diploma in Jewelry Design.

Jon Haynes is a performer, writer and director. He studied Drama at Sheffield University, a postgraduate acting course at The Poor School and completed a PHD at The University of Kent. Jon co-founded the multi award-winning Ridiculusmus in 1992, since which time he has collaborated with Co-Artistic Director David Woods to jointly devise, write and perform in all Ridiculusmus’ shows. These include TOUGH TIME, NICE TIME; IDEAS MEN; SAY NOTHING; YES YES YES; THE EXHIBITIONISTS; THE THIRD POLICEMAN; THREE MEN IN A BOAT; AT SWIM TWO-BIRDS; PARANOID HOUSEHOLD; HOW TO BE FUNNY; TOTAL FOOTBALL, THE WORLD MOUSE PLAGUE, THE ERADICATION OF SCHIZOPHRENIA IN WESTERN LAPLAND and GIVE ME YOUR LOVE (2015).

Emily O’Brien has worked extensively in the field of production both locally and internationally, primarily in Production and Project Management across the fields of theatre and dance, cultural and corporate events, and festivals. She completed a Bachelor of Dramatic Arts at the VCA in 2002 and a Master of Arts Management from the University of Melbourne in 2012. Emily’s clients, collaborators and projects (current and past) include;

Piece for Person and Ghetto Blaster has been commissioned by Mobile States and supported through Punctum Inc. Seedpod program, Creative Victoria and the City of Melbourne through Arts House’s CultureLAB. Tour produced by Performing Lines for Mobile States, with the support of the Australian Government through the Australia Council, its arts funding and advisory body, the Victorian Government through Creative Victoria, and the Besen Family Foundation.