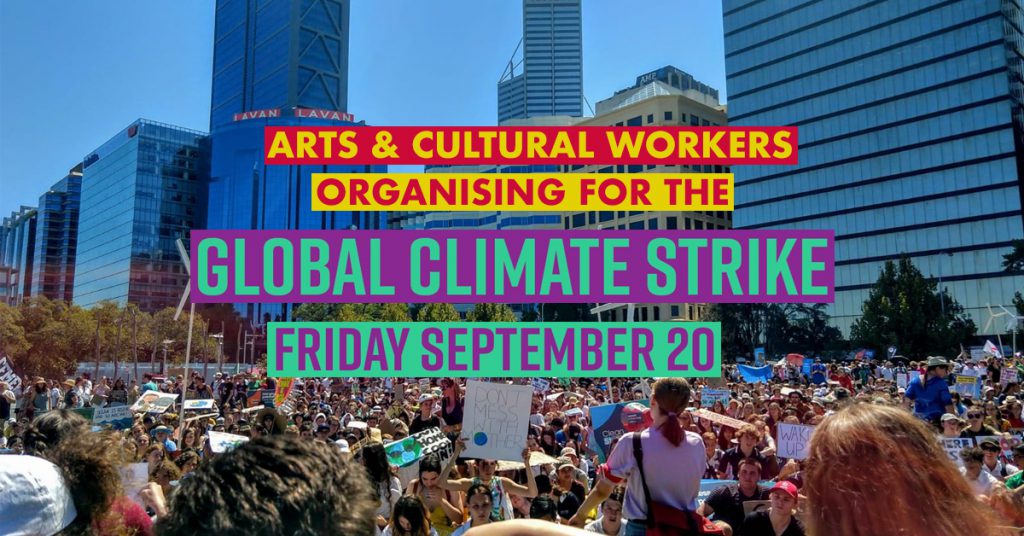 Presented by Arts & Cultural Workers for Climate Action
Calling all WA arts and cultural workers, organisations and institutions committed to immediate action on climate change.
This meeting is for those that want to join together as a community and explore ways we can act now, including participating in the upcoming Global Strike for Climate Action on September 20 and a sector-wide declaration of climate emergency.
For more information email ACWCAgroup@gmail.com

The harsh truth of the climate emergency is that we’re out of time. We can no longer defer change to governments and corporations, scientists or specialists. Our lives and culture are threatened and we all must come together to act now.
The Global Strike for Climate Action on September 20 is set to be the largest collective action in this history of this planet. It is led by the young people of School Strike for Climate. In this strike, the students are calling on all people of every industry and role around the world to join them and stop work.
By striking we are declaring a climate emergency, demanding urgent action on climate change and demonstrating that we are willing to act and embrace change ourselves.
At the same time, industries and workers around the world have been joining together to declare a climate emergency and calling on their governments to do the same. Are we as the arts and cultural organisations, venues, and makers of WA prepared to do the same?

An Illustrated Lecture with Nicholas Mangan