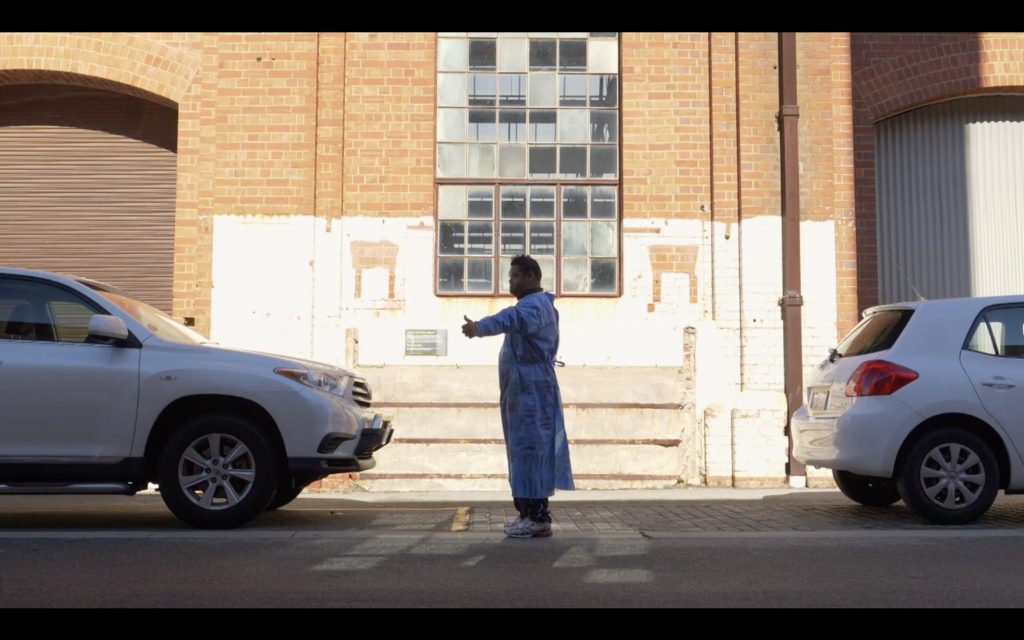 21 February - 18 April
Presented in association with Perth Festival.
Noongar artist and performer Patrick Carter uses performance, video, sound and painting to tell his stories. His work with The Lost Generation Project in 2007 and 2008 laid the foundations for a multi-disciplinary practice that includes elements of painting, dance, performance, and musical composition. He has developed a distinctive body of digital artworks, short films and large-scale projects exploring the challenges he faces in life and the relationships between emotion, colour and movement.
YEDI / SONGS from Patrick William Carter collects recent works into an evocative survey of Carter’s artistic practice. It tracks explorations in narrative, gesture and dance and the development of significant collaborations with filmmakers and musicians.
Carter’s films are at once biographical and highly experimental. Carter’s digital triptych, Bloom #1, #2, #3 (2017-18), is based on his experiences of illness and hospitalisation and present a healing narrative, foregrounding the relationship between connection to Country and the health and well‐being of Aboriginalpeople. In No More Cryin’ (2013) and Fireworks (2019), Carter explores the creative possibilities of film, weaving together colour, light, music, dance, painting and digital animation.
Central to the exhibition is a newly commissioned film, Wind (2021). In his latest short film, Carter dances a world into existence with rhythmic gestures and sweeping movements. In one moment he seeds the ground and embodies the growth of flowers. In his songs he sings of love and family, dedicating ‘my heart for you’.
‘I want to say…I am proud of my exhibition. I talk about my family, my mum, play drums and guitar…and it makes me happy to share this for the Perth Festival.’ – Patrick Carter, 2021

Patrick William Carter and Kelton Pell collaborated in the studio to create the audio-described version of WIND. It was crucial to Patrick and his team to have an audio description voiced by a First Nations Australian and they were fortunate to engage stage, TV and film actor, Kelton Pell.


You can experience WIND with both visuals and audio-description on iPads when you visit the exhibition YEDI/SONGS from Patrick William Carter.
Please ask our FOH staff for more information on your next visit.

Patrick Carter would like to acknowledge and thank his collaborators;

ABOUT THE ARTIST
Patrick William Carter is a Noongar man whose art is centred around his family and his experiences of life. His songs are made from many forms: dance and painting and film-making, as well as his tremolo-infused vocals. In the language of contemporary art, Carter’s work is interdisciplinary, hybrid, mixed, but he doesn’t draw lines between media at all. Across the diverse material and shape of his songs, Carter weaves meaning.
His digital works have been screened and exhibited in WA, SA, VIC and the ACT and include
No more cryin’ which has been exhibited as part of the group exhibitions Beyond the Western Edge, Regional Art Summit Australia:  Arts & Edges, Kalgoorlie (2014) and HERE&NOW13, Lawrence Wilson Art Gallery, University of Western Australia (2013).
Carter’s digital work, Dance, was exhibited in Revealed, Fremantle Arts Centre (2016), and as a re-commission from ANAT for Adelaide’s Tarnanthi Festival’s New Light (2017). This edit was subsequently screened at Enlighten Festival in Canberra (2018).
Carter began his collaboration with Sam Fox on Dance and in 2014 participated in the Australia Council funded projects, Room and Digital Dialogues (2015-16), creating over ten short digital works.
In 2018 and 2019 Carter was a cast member and contributor on You Know We Belong Together, a Perth Festival, Black Swan State Theatre Company and DADAA co-production.
In 2019, he collaborated with Sam Fox and Sam Price creating Fireworks for the Yagan Square tower and continues this collaboration to create his Perth Festival 2021 commissioned work, Wind.