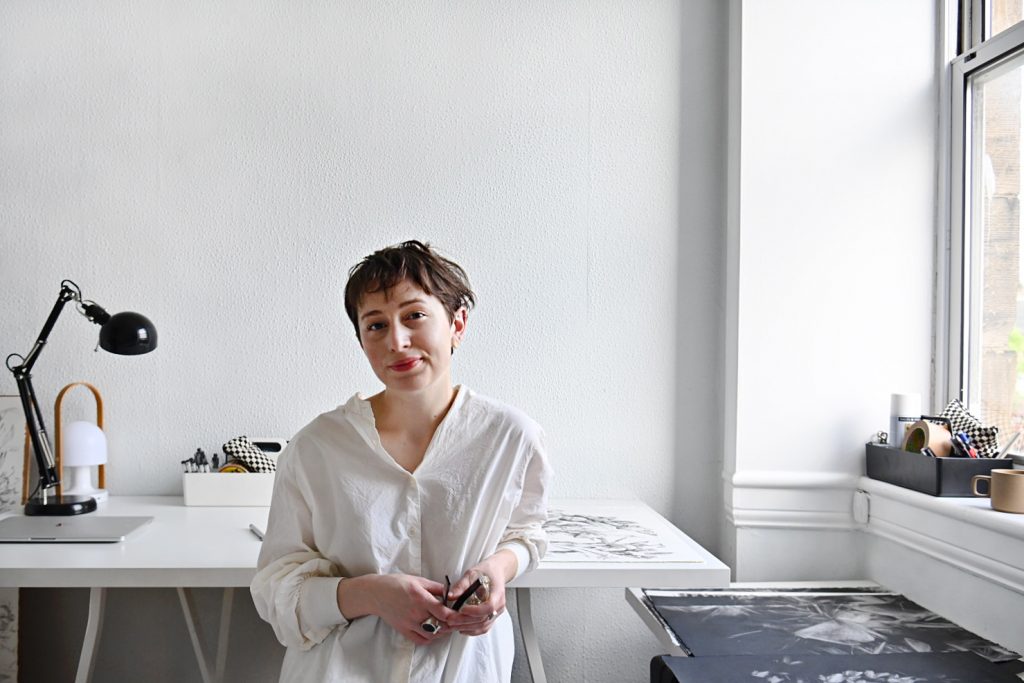 I find the stillness and focus of Imogen’s drawings profoundly satisfying. Working with a reduced, muted palette of ink or pencil on paper, Imogen’s delicately rendered studies of the environment draw you in – unlocking the dynamics of place that are often ignored or unseen, and prompting reflection on the strength as well as fragility of the natural world.

Imogen Kotsoglo’s illustrations seek to capture and explore our relationship with the natural world. Kotsoglo looks to plants conventionally considered as ‘weeds’ – a pejorative term for any plant growing where it is not wanted; plants that are often overlooked, forgotten and ‘out of place’ – to question the human-centred way of thinking and bestowing value on the natural world. Since 2019 and until recently, Kotsoglo has been living in Edinburgh, Scotland. Her new body of work, MATTER, focuses on plant species simultaneously native to Scotland and introduced to Australia, depicting delicate yet thriving/flourishing ecosystems that occupy a tense dual position as invasive weeds that are yet completely naturalised to their current environment.

Since graduating from Fine Arts at the Royal Melbourne Institute of Technology in 2015, Imogen Kotsoglo has completed arts residencies at Cairngorms National Park (UK), NES (Skagaströnd) and SÍM (Reykjavík) (both Iceland). She has exhibited widely both nationally and internationally as part of group and solo exhibitions, including The Substation (Newport, Victoria), Sim Gallery (Reykjavík, Finland), B Galleria (Turku, Finland), The Drill Hall (Edinburgh), SSA (Scottish Borders, UK), Seventh Gallery (Melbourne), Cool Change Contemporary (Perth), and Kolbusz Space (Perth). Her work is currently held in private collections around the world.

Imogen is one of the artists in Out of Bounds (2022), curated by PICA Curator Sarah Wall and Hatched Curatorial Fellow Miranda Johnson. Her work was available for sale at PICA’s signature donor event PICA Salon Vernissage 2022 on Saturday 6 August.

From Out of Bounds

From To companion a companion