Artists Salote Tawale (Fijian-Australian) and Emele Ugavule (Tokelauan-Fijian) met over Zoom to discuss the impacts of environmental racism on the future of arts ecologies, and their creative expressions. This conversation between two leading Fijian-Australian artists provides deeper insights into the exhibition I don’t see colour, currently on at PICA.

The starting point for I don’t see colour is a conversation that took place between the artist and a philosophy student at a party in the UK. Presenting painting, installation and video, “I don’t see colour” is a response to this exchange and an attempt to process the implications of this statement in the face of the unevenly felt impacts of climate change brought on by colonial and capitalist structures. The artist imagines climate change as an indiscriminate force that doesn’t see colour either.

Below is a snippet of the transcript of their discussion on Zoom.

EMELE:
Vinaka Salote. So today’s discussion, as you can see behind me I’m actually inside the exhibition room of Salote’s latest solo exhibition, titled I don’t see colour and that’s currently, as I said earlier, on display at PICA, and this work is multitextured and multilayered in the way that the room is presented, but also in the forms the work is presented and the discussions that are happening within. And Salote I’d love for us to begin by talking about the genesis of this work and this room that you’ve created?

SALOTE:
Where that all began well, I guess the hint is in the title for me, quite often titles relate to the beginning of a project I don’t see colour comes from a statement made to me by a young guy at
a party when I was in London and he kind of made this statement about not seeing colour with regards to race and it kind of stopped me for a moment. Because I think I know that people think that, but he was somebody proudly saying out loud that they were not encumbered by seeing race at all. And my response to him was how can you not, even though I knew that he wouldn’t have to, he was a white male. And we then started this discussion about what it means to not see colour and actually for me, the start of that discussion really impacted on all of the research I was doing into archives, there was a lot of discussion while I was away about the environment, and climate change, and I just thought about how a statement like that might seem positive, but it throws away legacies that our own privileges that we sit in but also that we all sit together with different legacies. And so that’s the beginning for me and what I really wanted to do was like create a work that travelled with me as I thought out this statement. So that’s why there’s so many things in the show, there’s hanging paintings there’s the background that you’re sitting in front of right now, there’s the bolabola which we can talk about a little bit later but all these little elements that relate to my own legacies, but also what a statement like ‘I don’t see colour’ really means. 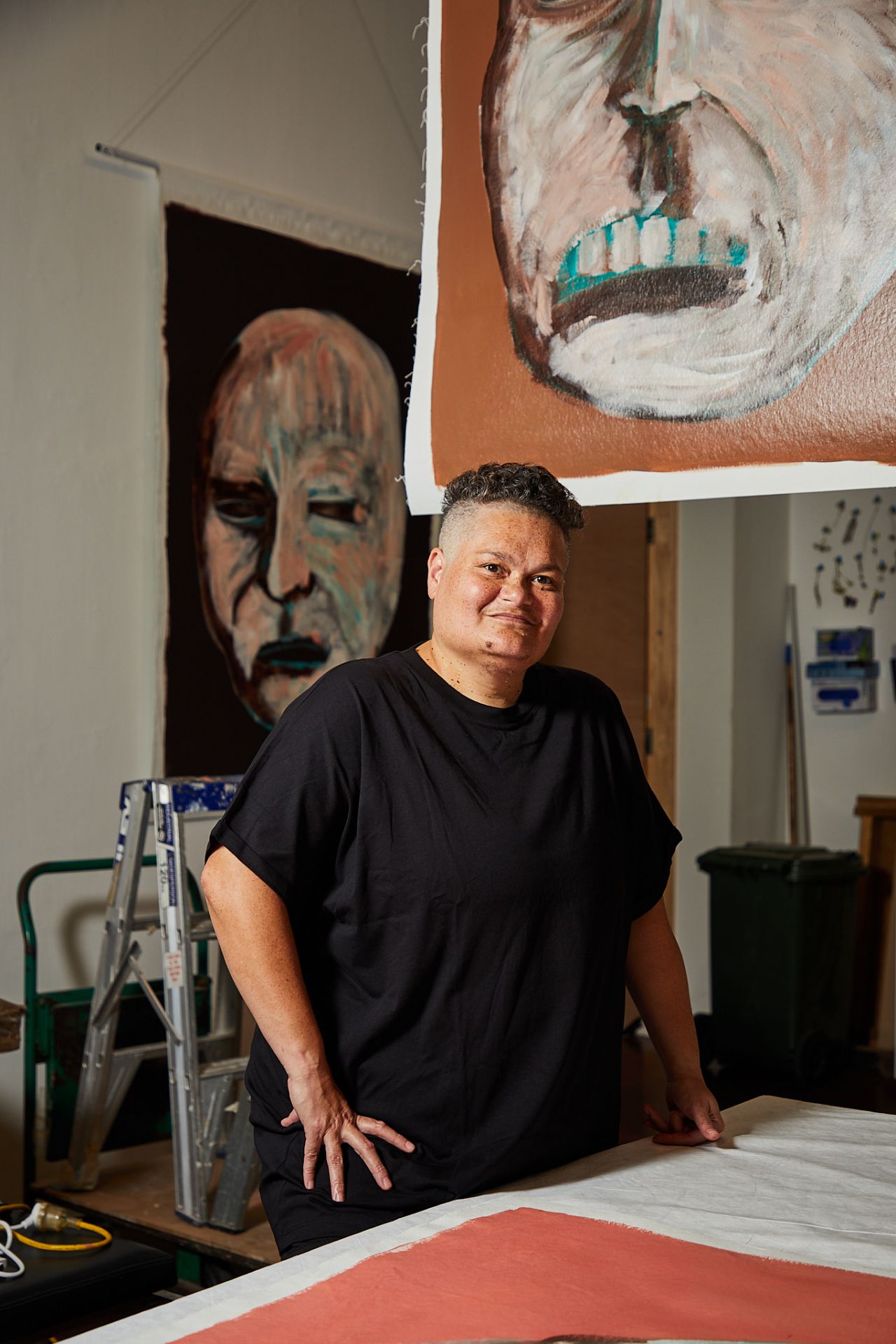 Salote Tawale was born in Suva, Fiji Islands and grew up in the southeastern suburbs of Melbourne, Australia and is currently based in Sydney, NSW. From the perspective of her translocated Indigenous Fijian and Anglo-Australian heritage, Tawale explores the identity of the individual within collective systems. Examining through self-performance, Tawale draws on personal experiences of race, class, ethnicity and gender formed by growing up in suburban Australia.

Tawale completed an undergraduate degree in Media Arts and Masters of Art at RMIT University, Melbourne and a Masters of Fine Art at Sydney College of the Arts, University of Sydney. Tawale has exhibited nationally and internationally, most notably at the Australian Centre for Contemporary Art; Spring Workshop in Hong Kong for Para Site gallery; at ICAN in Jogakata Indonesia. Tawale undertook an Indigenous Visual and Digital residency at the Banff Centre in Alberta Canada and received the Inaugural 2017 Create NSW Visual Arts Midcareer/Established Fellowship. Tawale recently undertook the Australia Council for the Arts six-month residency at Acme, London, focussing on colonial archives, Fijian objects, imagery and written records.

A graduate of the National Institute of Dramatic Arts, she has worked with various artists and organisations across Australia and the Pacific including Warner Music, Perth Institute of Contemporary Art, Sydney Opera House, Netflix & Mad Ones Films, Playwriting Australia, Art Gallery of NSW, Oceania Centre for Arts, Culture & Pacific Studies.

She is a sessional lecturer at the Western Australian Academy of Performing Arts, Lead Editor of Talanoa and the founder and director of Studio Kiin.