The day before PICA closed its doors due to COVID-19 restrictions, Erin Coates came just in time to meet studio artists Emma Horvát & Ómra Caoimhe and interview them in Studio One.

Erin Coates: I’d love to know how you came to work together and what you’ve been doing with your studio residency?

Ómra Caoimhe: Our first collaborative work was while we were at TAFE together. It was a period of time when we were trying to figure out the visual art scene in Perth, and what we were inspired by – being in an institution like TAFE. We came out of that institution together into ECU, which was really different. TAFE was so practical and we had made so much work at that point that it was really hard to navigate, but through that we were able to collaborate for WOMXN (2019) (an annual exhibition held at Spectrum Project Space to coincide with International Women’s Day) with our work “I’ll be Your Mirror”. That was the first time we formally collaborated and it was around ideas of trauma.

Emma Horvát: Working with photography as one of my mediums, when Omra and I collaborated for WOMXN; we were using photographs that depicted objects in relation to our bodies in conjunction with objects and their presence in space as metaphorical shells. Omra makes work with found objects and so do I, so we tried to bring the found objects into a psychological space, which turned into a kind of scene.

Erin: So in a sense you started working together out of a need for peership, because you were suddenly in a new context, one that was quite different to being at TAFE. And then you also found synergies between the way you work or wanted to work.

Ómra: I think we knew that it was more about being given the opportunity to work together.

Emma: It’s like that whole thing about life and art, both of us came from similar … I hope you don’t mind me saying…

Ómra: Similar circumstances, similar trauma backgrounds and so we were both at a period of time in our lives where we were rebuilding stability, and a new circumstance for ourselves.

Ómra: And that was a part of the concept for Womxn and I think it just became really strong emotionally for us to work together, and then we kind of just brought it into this space for the residency.

Erin: It’s a great thing to have, a space like this over a period of time; where you can actually let things unfold, and you don’t have that pressure of having to know in advance what your outcome is. Walking in here, it feels a lot like coming into a theatre set, where something is going to be activated or is still shifting around. How did you think about this residency before you started, and did you have any strategies  for how to use this space in this time?

Emma: We wanted to challenge some sort of notion of photography and portraiture.

Ómra: Yeah, we were really interested in portraiture to begin with. Following the last collaborative work we had made.

Emma: I think we really wanted to extend the work but, obviously like you said, when you come into the space the context changes… The work became more site specific.

Ómra: A lot more site specific, and also kind of reflexive because we were able to use motion, space and architecture. It was so different from the work that we made for Womxn in a way but also very connected to it.

Emma: We’re both used to making work where you just take a picture in your living room, because that’s the only white wall that you have. So this has been a really great change and a challenge for us both. 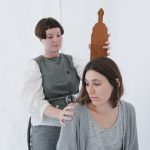 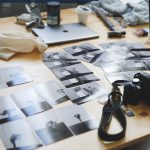 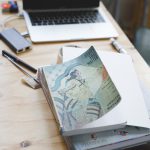 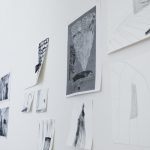 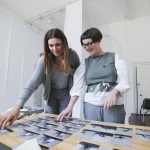 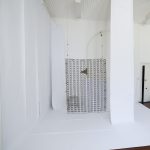