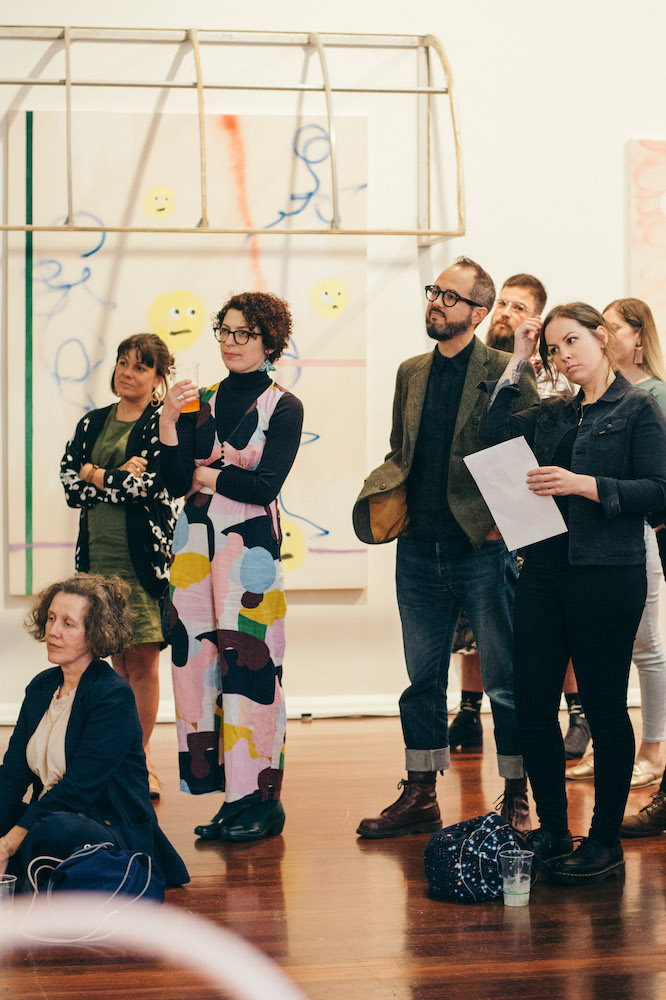 A celebrated the end of Hatched 2020 with the Night School closing event on Friday 9 October. Three incredible artists were invited to speak at an informal rally on the night.

Daley Rangi, Tanya Lee and Cassie Lynch, whose artistic backgrounds range across various artforms and relationships with formal education, shared their experiences of life-changing encounters with performances, poems, learning and teaching, to reinforce the love we share for the arts and humanities and the transformative ways that education can enrich our lives.

Below is a transcript of Tanya Lee‘s rally cry.

My Name is Tanya; I’m grateful to be standing on Whadjuk Noongar country. Recently I’ve been living and working up on Yawru country, which I’ll talk about some more in a moment.

It’s roughly 10 years since I graduated Curtin Uni here in Perth. After art school, when the instant fame and fortune that I had planned did not come along, I applied for, and luckily, got a job as an art technician at one of the private high schools in Perth.

I quickly found that I really liked it. I liked working in education; working with kids was fun as they are hilarious and I actually got paid to work with art materials every day, even though a lot of the job involved cleaning sinks and paintbrushes and other important, highly skilled duties of a similar kind.

But one of the main reasons it was great was because I could access the high school artrooms and materials. I could use the printing press and the paints, I had space to spread things out on, they let me use the paper and the ink and the clay and the kiln. I’d stay back after work for hours whilst the rooms were empty to use the materials. Almost like I had a secret addiction that I had to hide from my teacher-colleagues.

Something happened in my first year of the job while I was hanging up a small exhibition of year 10 self-portraits in the drama foyer.

A student’s parents walked in wanting to see their daughter’s work. When I remarked that their daughter’s painting was really good they responded with the comment, “She is always making art, we are really worried about her.”

“We want her to study maths and sciences,” they told me, “we want her to have a successful career and go to Uni.”

“But she can study art at Uni!” I said excitedly. “I did and it was great!”

“And what do you do with that degree now?” the student’s mother shot back at me quickly.

“I work here as an art technician!” I said excitedly.

They looked at me in awkward silence, and while they were not unkind in any way, it was clear that I did not epitomise the life of success or wealth that they aspired to for their daughter.

To defend them, and to stop this story being about class, it’s not their fault that they wanted their daughter to have agency and choice and safety and access. In fact, it’s admirable. Unfortunately, we live in a world where these things are a privilege, even though they should be a basic right. They are not things that everyone has. My parents’ sentiments had been similar when I went to study art.

I worked at the school for about 9 years. While I had that job, I was able to sustain a small but successful art practice; I had a solo show at Fremantle Arts Centre, exhibited at Lawrence Wilson Art Gallery, ACCA in Melbourne, and even had work in Dark MoFo festival in Tassie. So I was lucky and I worked there for a really long time because it could sustain me.

I’ve kept on working in education and last year I got asked to go back and do some lecturing at Curtin. I was super nervous but also really excited to get to work at a place where I had had a really good time as a student myself.

What surprised me was how many students in my second-year sculpture unit were studying part-time. They often would tell me a week in advance that they would need to miss a class because they had been scheduled on for a shift at work. I felt bad that they had to do this.

When I queried my unit coordinator about it, he just commented that things had changed since I was at uni and many students couldn’t afford to study full time pay rent and run a car, so part-time study while holding down a casual job was the only solution.

I grew up with the belief that everyone in our country has an equal right to education, but now I’m not so sure.

The Morrison government’s proposed changes to fees for humanities students are essentially financially pressganging its citizens into jobs and industries that serve its own economic goals.

This is not to diminish the importance of science and technology in today’s world. Between COVID19, the bushfires, animal extinction and the climate crisis, STEM subjects are essential. I would love to believe that the government is investing into these areas for reasons like rescuing our ecosystems, inventing renewable energy sources, or having better medical care. BUT rather I think the reason for this shift is predominantly about making more money.

At a loose end after COVID lockdowns and some cancelled and postponed projects this year, I decided to go and visit some family up in Broome for a kind of casual, self-directed residency with my second cousin who is a practicing artist. She is 83 years old. 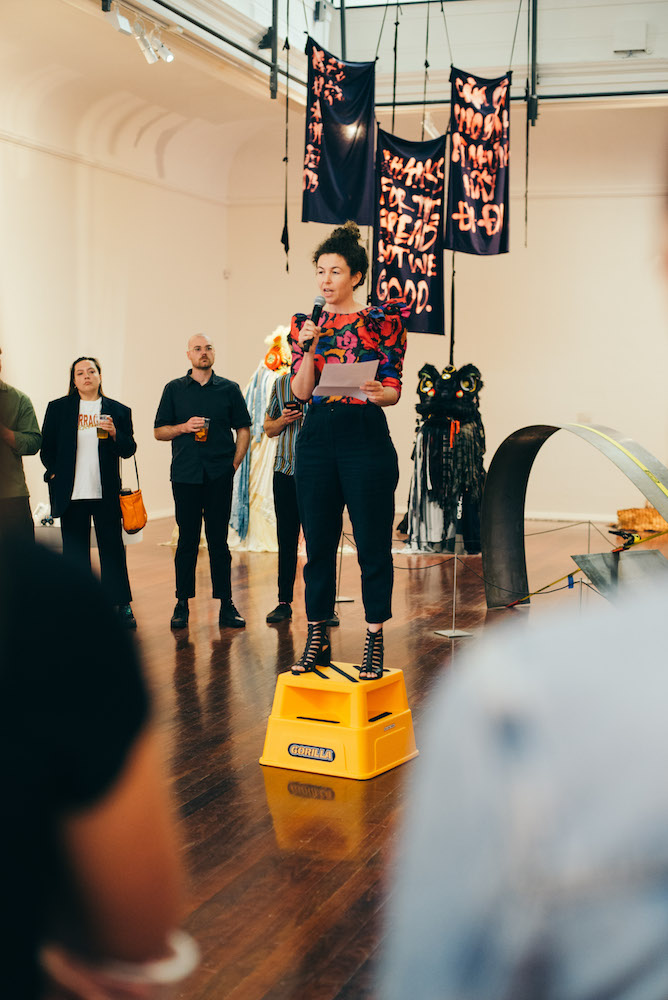 My cousin’s name is Angela Bakker – she has absolutely no interest in the internet, and when she works with a curator, they are of a similar vintage to her so you probably won’t find much about her out there online.

Angela is amazing. She trained as a production potter in the UK in the 1960s, a time when there were not many women at art school.

She frequently tells me that she has so much art to make before she dies, a comment that is both funny and devastating.

Her deadline is the ultimate deadline, and it’s real – making me feel very guilty, as sometimes I only make art when I feel in the mood or feel good about my life.

Working with her over the last few months has made me think about the sustainability of having an artistic practice; I really hope that I’m still getting to make art at age 83 and that I have the resources, health and agency to do it.

To really embrace sustainability is to let go of ideas of success, winning and wealth. I mean this in an environmental and economical sense, but also on a personal level, where perhaps if we stop trying to be individually ‘the best’, we can be collectively more. Include more voices, be more dynamic and understand more about the world.

So for those of you here tonight who are new graduates, I wish you not ‘every success’, but instead ‘good sustainability’ for your future, practices and lives.

Tanya Lee is a visual arts maker, performer and educator. Her diverse social practice is highly shaped by audiences and people she pulls in to collaborate with her along the way. Creating sculptures and costumes to be used in humorous ways, her absurd works often interrupt or subvert everyday social protocols.

Tanya completed her master’s degree in visual art at Curtin University after spending a year as a visiting scholar at the École Nationale Supérieur d’Art de Dijon (ENSAD) in Dijon, France. Tanya’s videos and sculptures have been shown across Australia in galleries including ACCA in Melbourne, the MCA in Sydney and Lawrence Wilson Art Gallery in Perth.

When not in the studio Tanya tutors sculpture-based skills in a diverse range of educational settings including Curtin University, North Regional TAFE and a range of online and studio workshops. She has worked with students and audiences from ages 6 to 96.