Thoughts on Piece for Person and Ghetto Blaster by Helena Grehan

Performance is an old concept. It has its roots in the late 19th early 20th century and in the desire to burst the barricades of society and culture, to resist the structures and strictures of societies that were damaged and broken by wars, by dissent and by resistance.

It developed and changed over time but it was really about the desire on behalf of artists, of collectives and groups to expand the space for representation and for art more broadly. Think Alfred Jarry’s Ubu Roi, think Marcel Duchamp’s Bicycle Wheel, think Antonin Artaud’s Manifesto for the Theatre of Cruelty, the works of Bertolt Brecht, Samuel Beckett and others including Allan Kaprow, Marina Abramović, Chris Burden and more …  but where are we now?

These artists tore up the rule book and created works that resisted interpretation, that shied away from previous ways or models of art. They created pathways for a range of contemporary approaches to art and to the work of artists who have taken the challenge and have moved beyond representation to something else. 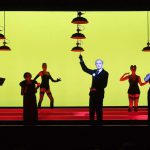 Bertolt Brecht’s Threepenny Opera at the Perth Festival in 2013 courtesy of aussietheatre.com.au 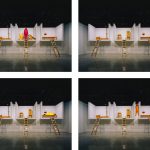 Marina Abramovic, The House With the Ocean View, 2002, courtesy of pbs.org

Artists such as Nicola Gunn contribute to the evolution of performance by opening up a space for spectators to come in and engage with a work full of ideas. One that is not telling a singular story, does not necessarily let you go home satisfied.

Rather, this is a work that combines a range of genres – dance, song, movement, performance art, storytelling and comedy – to invite you to wonder, to reflect and to consider. To take a journey with the ideas and the topics covered and to make up your mind about what it is all about.

For me personally, it was a fabulous show, full of wit, provocation and reflection. I especially appreciated the changes in pace, the shifts in ideas and performance modes – from movement to dance to performance art and back again.

I loved Gunn’s ability to retain the thread throughout the work’s various meanderings/travels and her very funny and insightful reflections on all topics from the everyday to the philosophical. I think the work managed to stimulate profound considerations about the ways in which we live with, respond to, and at times, judge others, as well as reminding us about myth, poetry, the complexity of contemporary relationships.

It also provided some hilarious perspectives on the ways in which artists can be co-opted by (or become) the mainstream and what this might mean for their work.

And finally it asked us to think about whether or not to pause before we intervene between a refugee and a duck!

Professor Grehan is currently leading an Australian Research Council Discovery Project bringing together international partners from four universities to examine the value of theatre in the digital age.

—
Piece for Person and Ghetto Blaster is running at PICA for a limited season 13 – 19 February as part of FRINGE WORLD 2016. Find out more and get tickets here